She stood out as a really strong dancer, so I left her my business card and asked if she’d be interested in coming into the studio to try out some new concepts together. After syncing up our diaries, we managed to find a date at the beginning of January that worked for everyone and headed into the studio with a handful of new concepts and styling I wanted to try out. I’d had my eye on the large windows in the studio, which offered a great source of directional natural light to play with. We worked on some floor based poses before Gaby climbed into the window and we were able to create some images using the hard light. I love the contrast in these.

Another concept I had in mind for the day was using coloured gels. I have played around with gels in the past, with a Rogue Set for my speedlights, but they had been sitting at the bottom of one of the studio drawers since I relocated to Hertfordshire and hadn’t seen the light of day for a while. Having been inspired lately by the work of Jake Hicks, I invested in a new set of gels from his collection that could be used with my Elinchrom ELB400. Gaby and I did a fair bit of experimenting with different colour variations to find ones I felt worked best for my style, some more successful than others! Here are a couple of my favourites. I definitely want to look into taking the creative process a little further with the lighting gels, so watch out for more of those on the blog over the next couple of months.

The final concept we attempted on the day was shooting with flour. Having seen this attempted several times across the internet I was keen to give it a go, although it involved a lot of forward planning to make sure the flour didn’t wreck the studio or damage any of the equipment! It actually wasn’t too bad in terms of mess, covering all surfaces with dust sheets and keeping the flour throwing to one corner of the studio. It was slippery though for Gaby and we spent a fair chunk of time sweeping up the flour from under her feet to give her a more stable take off and landing for every jump. It was great fun to shoot, but it did get me thinking about other potential powders and liquids that could be used in the studio. Something to ponder! 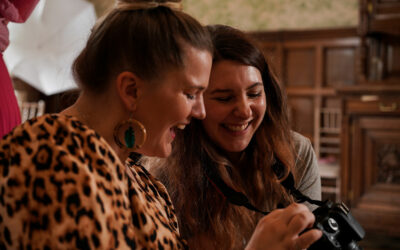