December is a month of festivities and and celebrations for all, but here in the studio I’ve got an extra special reason to be cheerful. Today, December 1st 2013, marks the fourth birthday of Tigz Rice Studios! There’s carrot cake and candles, plus a bottle of bubbly chilling in the fridge for later as despite the busy season I’m refusing to let it go un-celebrated! The last 12 months have been such an exciting time, with so many wonderful achievements and opportunities presenting themselves through the Studios. Here’s a few of the highlights of the past 12 months…

Looking back to Last December, our third birthday celebrations were extended by winning two small business awards from Theo Paphitis of Dragon’s Den fame and Jacqueline Gold, CEO of Ann Summers. Not only was it a great privilege to have my small business recognised by some of the top names in business, but also for the fact that both are heavily involved with the high street lingerie industry. It was also the month that I had the privilege of shooting the inimitable Gwendoline L’Amour, featured below.

Moving forward into January, 2013 started on a high note with the release of my first 8 page editorial for Cosmopolitan magazine, featuring Tabitha Taboo, Kiki kaboom, Ivy Paige and Shirley Windmill. Shot in the Rivoli Ballroom in South London, I’m pretty certain I went out and bought pretty much every copy in Bromley to show off and send to relatives! A tactic that certainly paid off, for after bringing a copy of the magazine to the SWPP convention later that month, I was offered lighting sponsorship by The Flash Centre, who’s portable and lightweight Quadra kit has been an absolute lifesaver on some of the location shoots I’ve been involved in over the last few months. I wrote a review on the Quadra kit a few months back, which you can read by clicking on this link, but don’t just take my word for it, try it out for yourself!

March is always a busy month for the photography industry, with the annual Focus On Imaging convention in Birmingham providing some incredible opportunities for networking, trying out new photographic equipment and generally developing my skills as a photographer and retoucher. This year, I was invited along once again to represent pressure sensitive technology company Wacom to demonstrate the Intuos and Cintiq ranges over the four day event. The convention was also marked by the invitation to join the Adobe Influencer programme as a photographer and retoucher – possibly one of my proudest achievements to date. Over the next couple of months, I was to spend several days at the Adobe HQ in Maidenhead recording video content on software techniques for photographers. You can watch on of them here below.

April saw some big changes for Tigz Rice Studios as I packed up my little studio and relocated with James to St Albans. There were a whole number of reasons behind the move, but some of the major benefits to the studio were to make use of the 24 hour train line to make my commute to and from late night events a more pleasant experience, as well as as making it much easier for Northern and international clients to reach the studio. This year, the studio has seen the likes of Banbury Cross, Sugar Blue Burlesque, and Vicky Butterfly amongst others.

June continued in a similarly busy fashion, focusing around the launch of Adobe Creative Cloud. As an Adobe Community Professional, it was a real privilege to be invited to the Create Now Tour in London, as well as writing a couple of online tutorials for Digital Arts Magazine on the new features of Photoshop CC. Later on in October, these tutorials were to be featured in a 35 Best Photoshop Tutorials blog post, which was a great honour.

July was another huge month for personal achievements as I launched the brand new redesign of the Tigz Rice Studios website. The culmination of many (many) weeks of hard work and frustration, a special thank you goes to friend and mentor Ian Sayers, who saved me more than once from accidental full site deletion! Lessons learnt from this experience? 1) Anything is achievable with a little hard work and determination. 2) Never code when tired or you may manage to somehow delete your entire public domain folder by accident. True story.

Progressing into August, it was a real privilege to welcome on board a number of new clients, including the Beck Theatre who commissioned me to photograph their summer performance of Flashdance. It was a great show to work on the and the iconic image of the water pour from the first half has since been published in a number of newspapers and online media platforms, with a retouching tutorial commissioned for January. Links to follow in the new year!

September was a busy month of photography, with commissions from regular clients Kiss Me Deadly and Platinum Lace alongside new clients such as Burlesque On Ice, a brand new show coming to London in February 2014. It’s been a real pleasure working with the cast, which features Ruby Deshabille, Kitty Devine, Vicky Butterfly and Glorian Gray amongst others. They recently performed a preview show at Westfield Shopping Centre in White City, which I blogged about last week.

September was also the month of my very first appearance on QVC for Wacom. Appearing on the technology show with both the Wacom Bamboo and the Wacom Inkling, I’ve been overwhelmed by the number of you that have stayed up to watch and support me on the late night show! No more tv appearances scheduled in the diary, but I will keep you posted for when I’m next on the telly!

October got off to a busy start with an invite to speak on behalf of Wacom, Adobe and Datacolor at the Hasselblad’s ShootLDN event in Brick Lane, followed by a trip up north to give a series of lectures at the Institute of Medical Illustrators. It was also the month I got to shoot international burlesque star Immodesty Blaize. Photos will officially be released shortly, but for now, here’s a teaser!

Last but not least, November! It was a real privilege to be invited to record an Adobe Ask A Pro e-seminar on photo retouching. The e-seminar covered everything from Smart Objects and blending modes to fixing shadows and highlights via the new Color Range tool in Photoshop. If you have a spare 45 minutes, give it a watch below. You might learn something new!

November also saw the launch of new circus themed pub The Aeronaut in Acton, where you can find me as resident photographer every Friday. Four weeks in and the venue is doing fabulously. If you find yourself in West London over a weekend, make sure you pop in – they even have their own micro brewery!

It’s been a brilliant year and I’d like to say a huge thank you to some special people who have helped make all of this possible. To James, for his unwavering support since the very beginning, and putting up with a fine layer of glitter on everything we own. To both sets of parents, for their ongoing support and encouragement. To Ian, for generously offering his time and expertise. To Miss Honey Bare for all her hard work in the studio. To Wacom, Adobe, Datacolor and The Flash Centre for their ongoing support of the studio and, last but not least, all of you, for being there and sharing the love!

As for year five? Well, I’ve already got some ridiculously exciting plans lined up for 2014, including a week’s residency at Photography Farm in January, as well as appearances at a number of photography conventions, photography clubs throughout the UK and there are rumours of some touring… Watch this space! 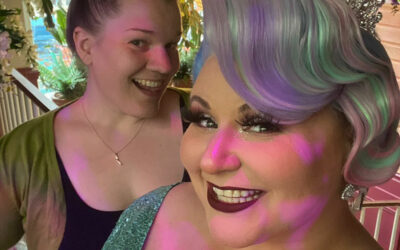 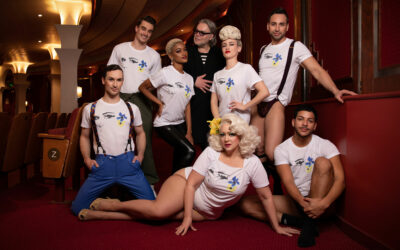